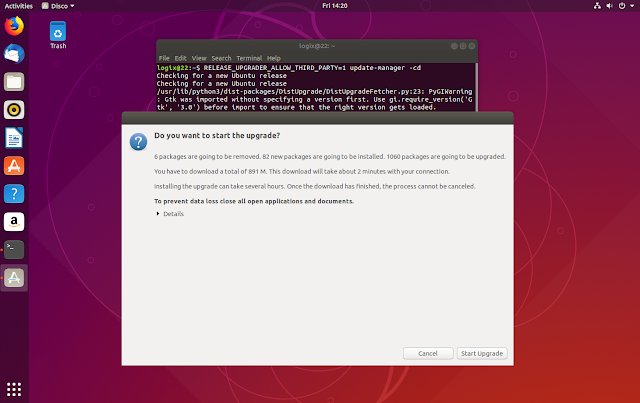 A regular Ubuntu release upgrade (to a newer Ubuntu version) disables any PPA or third party repository that may be enabled.

Some recent changes to ubuntu-release-upgrader allow keeping PPA and third party repositories enabled when upgrading to a newer Ubuntu release, while also providing better support for cases in which the users have their own mirror of the archive. This is done by using an environment variable, RELEASE_UPGRADER_ALLOW_THIRD_PARTY.

RELEASE_UPGRADER_ALLOW_THIRD_PARTY existed for a while, but it didn’t work because it didn’t actually pass the variable to the dist-upgrader, until now.

Moreover, another recent change makes sure third party repositories support the release to which the user is trying to upgrade to, disabling the repository if it doesn’t support the Ubuntu version to which the system is upgrading.

Brian Murray, Ubuntu Bugmaster, says this should solve many of the issues people are encountering when trying to upgrade from one Ubuntu release to another. I’d also add that his makes it easier to continue receiving updates to software installed from PPA / third-party sources after an Ubuntu upgrade, while also not removing software that might be otherwise removed due to incompatibility when upgrading.

These changes are already available for upgrades from Ubuntu 18.10 to 19.04. Ubuntu 18.04 to 18.10 upgrades will also be supported, but the changes are in testing right now, being available in the proposed repository.

The RELEASE_UPGRADER_ALLOW_THIRD_PARTY environment variable can be used with both the command line and the GUI upgrade tools. So when you want to upgrade from Ubuntu 18.10 Cosmic Cuttlefish to Ubuntu 19.04 Disco Dingo (or from Ubuntu 18.04 Bionic Beaver to Ubuntu 18.10 Cosmic Cuttlefish, once the changes make it to the main repositories) and keep PPA and third party repositories enabled, run the upgrade from a terminal, like this:

(-d is used to allow upgrading to development releases – for example to upgrade from Ubuntu 18.10 to 19.04 right now, while Ubuntu 19.04 Disco Dingo is still in development)

It’s worth noting that you may still see a warning about third party sources being disabled on upgrade, but those that support the Ubuntu version to which you’re upgrading will not be disabled.